Saint of the Gutters

Saint of the Gutters By Prof. Neerja Mattoo

Introduction
Mother Teresa spent much of her life helping the poor, the needy and the sick abandoned on the roadsides and in the gutters. The situation in Calcutta was appalling, particularly in the slums. The old and the sick people were living in the streets and in the gutters. Many of them were even eaten by rates. Many of them had wounds on their bodies and were still covered in dust and mud. Mother Teresa took them, brought them to a building several times, washed them, covered them with a nice cloth. She treated them with all the facilities she could make available for them. Many of them went past the recovery stage. She wanted them to know the love of Jesus, at least until they died. Many asked Mother Teresa, ‘You are God,’ and it talks about how they felt about her.

Summary of Saint of The Gutters

Mother Theresa is viewed as one of the best and great personalities of the twentieth century. She did not have any position in politics or government, yet she was a greatly known and admired person in the whole world. Mother Theresa was granted different honours including the Noble Peace Prize. She has nothing as her property; she devoted her whole life to the service of the poor and the destitute. The general population from everywhere throughout the world including the rich, the famous and the powerful flocked to her and wanted to become a part of her mission and to give some clear significance to their lives.

Mother Theresa was born on 26th August 1910 at Skopje, Yugoslavia. Her name was Agnes Gonxya Bojaxhiu. Her father passed away at her tender age she was only eight years old. At that time her mother, Drana who knew sewing and needlecraft, provided her with sustenance. Agnes loved to spend her time in the Church. She was also a keen listener to stories of Christian Missionaries travelling to different parts of the world to serve, educate and tend to the poor, the illiterate and the sick. Their life of devotion fascinated her. 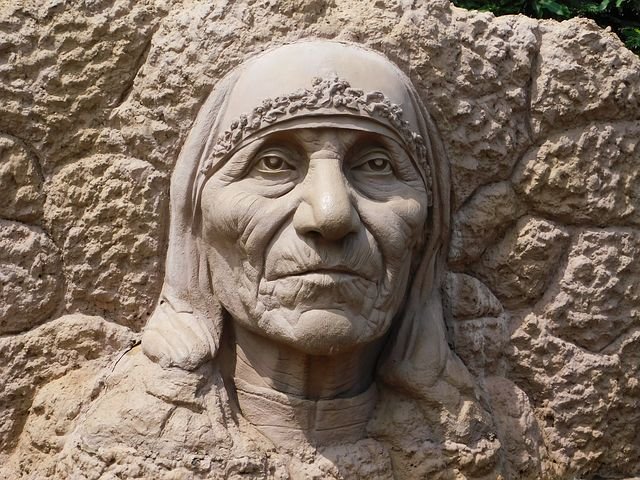 When Agnes was fifteen, something unique occurred with her. She was on a mountain trip. She heard a voice saying “Follow God and serve others”.She believed in God and thought she was sent for some special work in this world. She decided to leave home and become a nun. She also decided to lead a life of poverty, serve the people and visit India. She resolved to go to Kolkata in India where she would serve the poorest of the poor. Agnes arrived in Kolkata in 1929. She spent her time in learning Hindi and Bengali to communicate with the local people. Then she began to teach in schools run by the sisters of Loreto, first at Darjeeling and then at Kolkata. She finally became a nun in 1937 and was named “Theresa”.

While teaching in Kolkata, Sister Theresa (as she was now called) felt empathetic to the poor and homeless living in city slums because of their appallingly unhygienic conditions and all kinds of diseases. She could tolerate all this and would help them by cleaning them up and looking after them till they recovered or died with dignity. Then one day in 1946 while travelling on a train from Kolkata to Darjeeling, she again heard a voice telling her to leave the convent and help the poor by living with them. It was the final turning point in her life. Acting on the voice, she asked the Church to give her permission to start a new order of nuns who would help her in her new mission. She got the permission and started the order of the “Missionaries of Charity” in 1948 by acting as its first Mother Superior.In order to look like the poor Indian women, she gave up her nun”s habits and dressed in a cotton blue-bordered white sari. She set up Nirmal Hriday, home and hospices for the poor, the orphans and the dying.

In 1970, Malcolm Muggeridge, a well known British writer came to Kolkata. While walking through a street he happened to see Mother Theresa cheerfully busy in her unflinching service to the wretched of the earth. He was so much impressed by her that he wrote a book and made a documentary film on her, aptly titled, “Something Beautiful for God” in order to bring world attention to her otherwise quiet work. She was awarded the Nobel Peace Prize in 1979. Before her death in 1997, she oversaw the opening of branches of her“Missionaries of Charity” in a number of countries to carry on her missionary work of serving the poorest of the poor. She used to say that “one must give love till it hurts”. She was truly a saint of our times, who made the most insignificant and unwanted humans feel that God, through Mother Theresa, remembered them.

5. Who flocked to her and why?
Ans. The general population from everywhere throughout the world including the rich, the famous and the powerful flocked to her and wanted to become a part of her mission and to give some clear significance to their lives.

Q.1. What activities made Mother Teresa so exceptional?

Ans. Agnes who later became famous as Mother Teresa was a Catholic Christian. Right from her childhood, she walked away from the beaten track. She would enjoy doing religious duties like decorating the church for festivals and singing in the church choir. She was inclined to serve humanity. She had reached the level of a mystic just at the age of fifteen when she heard her inner voice asking her to follow God and serve humanity. She worked for the benefit of the poor by setting up Nirmal Hriday, the home and hospices for the poor, the orphans and the dying. So, she dedicated her life to the service of the poor and destitute. She lived a life of poverty and simplicity and won the hearts not only of the poor but also of the rich, famous and powerful people.

Ans. St. Mary High School was meant for girls from rich backgrounds. While teaching there, Mother Teresa was not satisfied because her ambition was to serve the poor. So, she left
school in order to dedicate her life to the service of humanity.

Q.3. What did Mother Teresa mean by ‘to fail would be to break faith’?

Ans. Mother Teresa strictly believed that God wanted her to obey his will by helping the poor and the destitute. He communicated with her through her soul and asked her to serve humanity. Thus, these words mean that if she failed in her work of helping the poor, it would mean that she broke the trust (faith) of God in her.

Q.4. What kind of life did Mother Teresa lead?

Ans. Mother Teresa lived the life of poverty and chastity. She dedicated her whole life to the service of humanity. She worked for the betterment of the poor, the orphans, the destitute and the dying.

Q.5. Why do you think Mother Teresa learnt Bengali?

Ans. Very early in her life, Mother Teresa had decided to come to India with a
mission of helping the poor. She had resolved to go to Kolkata and serve the poorest of the poor in this part of the world. But for this, she needed to make herself able to communicate with the people living there thus she learnt Bengali before starting her mission.

Q.6. What did Malcolm Muggeridge see on the streets of Kolkata?

Ans. Malcolm Muggeridge was a well known British writer. In 1970 he came to Kolkata. One day while walking through a street, he saw Mother Teresa cleaning the sores on the body of a half-dead man. He was very surprised to see that this great woman was doing such a repelling job with utter happiness and satisfaction. She did not have even the slightest trace of disgust at the bad smell. He was quite impressed on seeing the glow of peace on Mother Theresa’s face while serving the poor and treating the dying.

Categories: Prose
Tags: Questions and Answers of Saint of The GuttersSummary of Saint of Gutters

Summary of A Lesson My Father Taught Me by A. P. J. Abdul Kalam

Summary of Verona’s Two Gentlemen Submitted by A. J. Cronin

Verona’s Two Gentlemen Submitted by A. J. Cronin A J Cronin was a medical doctor by profession. He abandoned his career as a physician and began writing novels and short stories. Several of his works Read more…